General Discussion Section for All Other Makes and Models of Handguns and Rifles, including Aftermarket Accessories. Please keep Canik Firearm discussions in the Canik section.
Post Reply
8 posts • Page 1 of 1

Wondering if any of you guys ever had or currently have any experiences regarding the Shadow MR918? I've seen it sitting at the gun rack in Cabelas and I'll have to admit that it really sparked my curiosity. A bit pricey for a polymer pistol imo but a sweet looking pistol nonetheless. I've always had great luck with the Glock 19 and the MR918 is basically a custom G19 with a lot of the desired features already built into the pistol right out of the box.

There isn't anybody I personally know that currently owns one and none of the local gun ranges happen to have any available for rental so I felt out of luck.... That was until I was at work when a local shooter brought one in that he had just purchased.

Sure enough he asked if I wanted to put a few magazines downrange and of course that's exactly what I did.

Let me say that pistol felt absolutely amazing. It's lightweight but with your hands being able to sit so high up on the grip, recoil and muzzle rise was easily managed. And there just isn't anything to complain or cry over regarding the trigger. It's advertised at a 4-4.5 lbs break but I'm sure it's breaking under 3.5 because my well broken in TP9SF Elite have been measured to break at 3.5 and the trigger on this MR918 was noticeably lighter in comparison. Very little take up with a very light, smooth, crisp, clean break and a very short and audible reset. VERY much like a Glock with the competition pyramid trigger installed if you've ever shot one before. The aggressive grip texture, undercut trigger guard, along with that beautiful trigger really make the MR918 a nice and comfortable shooting pistol... Not to mention it's extremely accurate.

Unfortunately, that particular pistol was failing to go into full battery with every 3-4 rounds fired. Watched the guy switched from AE to Rem to WWB even to some Hornady Critical Duty +p ammunition and that pistol still experienced the same malfunctions. The owner also stated that he was experiencing a handful of light strikes regardless of ammunition used. On top of it all, the magazine release would sometimes get stuck in the depress position and he'll have to manually dig it out (easy fix but for the price he paid I can understand his frustration). So far he have 1200 rounds through the firearm without improvement whatsoever so he did leave the range with the intention of contacting the manufacturer. I had not received any updates as he haven't shown up to shoot since. Overall it was a sad disappointment for a pistol with so much potential.

I don’t own one, I have looked at them. They are very Polymer80esque. If you are confident in your hand with a bit of patience and a few of your own tools, you could build a like pistol in a P80. Doing so would let you have a pistol with whatever aftermarket goodies your heart desired and probably save a bit, have an un-registered gun (assuming your state allows), your choice of color and the satisfaction of saying “I built it”.
1 x
Top

GearHead_1 wrote: ↑
Wed Nov 06, 2019 5:02 pm
I don’t own one, I have looked at them. They are very Polymer80esque. If you are confident in your hand with a bit of patience and a few of your own tools, you could build a like pistol in a P80. Doing so would let you have a pistol with whatever aftermarket goodies your heart desired and probably save a bit, have an un-registered gun (assuming your state allows), your choice of color and the satisfaction of saying “I built it”.

Yeah I've got a P80 build I love it I like the grip feel on it with out the hump on the back and undercutting, dont have quite as fancy slide on it as the mr918 (yet) but for the price of the mr you can build a p80 pretty much spec'd out the same.

The P80 frames are so simple to build all you need is a drill,file,snips, sandpaper, though a dremel makes it easier and quicker.
1 x
Top

@Simply A Nerd, You’ve probably already seen the P80’s but if by chance you haven’t go to their website and do a little reading and watch a few YouTube’s on them. You’ll see striking similarities between them and the Shadow in your link. Building them isn’t rocket science and of course I’m a bit biased because you’ve got to say good things about something you’ve made.

My P80’s are the smoothest striker fired guns I own. They shoot incredibly well and I’d have to believe the Shadow’s are set up to do the same. Between friends and family we’ve picked up 15 P80 frames in the past 5 months and they are in various stages of build. I’m thinking Polymer80 needs to set up a Friends and Family discount program. I’m sorry to have swayed so far off of your topic.

This all said, they aren’t as interesting to look at as the Canik SFX. 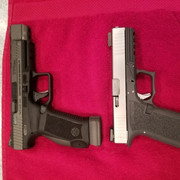 @GearHead_1 Thank you for the suggestion. I personally do not have any experience building one myself but what you're saying makes perfect sense and I'll do some digging and research hoping I'll be able to build myself one in the near future. I've seen several and shot a few but the thought of building one myself just never crossed my mind. Everytime any of us purchase any firearm we always wish something was different so why not just build our own! This way we'll be able to have everything according to our desires. lol. Admittingly I'm not the most gifted individual when it comes to anything that involves any mechanical work but I do have people who definitely knows what they're doing so why not eh? lol
1 x
Top

I can’t emphasize this enough, it is not rocket science. Once finished, most people will look over their shoulder and smile at themselves for even thinking they might not be able to do this. There are enough videos out there that I think most anyone can do this if they’re just willing to take their time. A Dremel, hand drill, a selection of flat and round files, end cut pliers ($10 Harbor Freight) and a flat stone are about the only “specialty tools” that I can see anyone needing. Many people already have at least some of these.

The flat stone isn’t a must but having one that you can work both sets of rails at the same time while installed in the frame will make for the smoothest/slickest of slide surfaces. You could also do this with a couple different grits of sandpaper and a small sheet of glass. Many people don’t worry about this at all and figure that a few hundred rounds down the pipe will accomplish the same thing. For me, I just wanted one that worked flawlessly from the the first squeeze of the trigger. The end cut pliers too are not a necessity but they will save you time. The good news here is that once you have the tools you can do it all over again, hooray! There are a variety of 9mm’s, .40 & .45 caliber frames available.

Great advice; this is exactly how I plan going about my 1st 80% build when I'm up & running again.
0 x
LT