Narrower grip on the SFX

Narrower grip on the SFX

I hate to admit it but.. I have freakishly small hands.

This honestly isn’t SFX specific , but seeing that there’s interchangeable backstrap option , I was wondering maybe there is a way to modify

If I were to grip as high as I can and with full support of my palm/hand on the back of the gun , it looks like this : 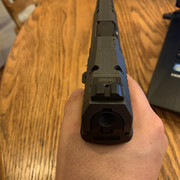 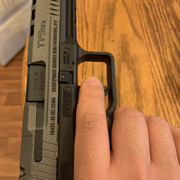 As you can tell, I can barely reach the trigger and it has caused me to flinch the gun when pulling the trigger, especially on quick follow up shots.

Currently this is how I would hold it : 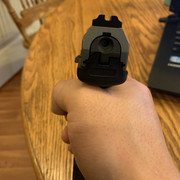 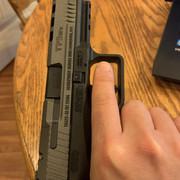 I try to cover the rest of the surface area of the grip module with my left hand as much as I can.

I tried putting on the backstrap that came with the SFX but that one seems to actually stick out even more.

Very good pictures showing your dilemma with the grip. I am sure some others will chime in with suggestions.
1 x
Top

Your problem is a real one but just perhaps putting a FreedomSmith trigger in it would help. It decreases the pull and actual length in resting positioning quite a bit.
0 x
Top

GearHead_1 wrote: ↑
Tue Mar 24, 2020 1:36 pm
Your problem is a real one but just perhaps putting a FreedomSmith trigger in it would help. It decreases the pull and actual length in resting positioning quite a bit.

I have actually considered this. Checked out some of the After installation videos and it looked promising.

The only thing is as much as I want this gun to be Competition purpose only, it will most likely be used for home defense situation and didn't want the trigger to be too light/short....How do you like yours?
0 x
Top

I have the Freedomsmith Pro trigger and absolutely love it. While my SFx is not my primary carry/home defense weapon, I wouldn't hesitate using it for either.
0 x
"When you come to the fork in the road, take it." -Yogi Berra
Top

Jester560 wrote: ↑
Tue Mar 24, 2020 2:45 pm
I have the Freedomsmith Pro trigger and absolutely love it. While my SFx is not my primary carry/home defense weapon, I wouldn't hesitate using it for either.

My Champion is awesome. My son and I both put one in. If you don’t change the springs it won’t be significantly lighter than the original. That is not to say it doesn’t feel better. It’s better in almost every respect but the take up is a whole lot less with the trigger starting further back. It still has a predictable wall that you’ll get used to in short order. I don’t have any problem recommending these triggers.
1 x
Top

The Freedomsmith trigger will shorten the reach of the trigger. I had similar issues, not too bad tho but once I installed the FS trigger it relieved the issue
0 x
Top

As you can tell, I can barely reach the trigger and it has caused me to flinch the gun when pulling the trigger, especially on quick follow up shots.

Here's a picture I took a while ago after I installed my first Freedomsmith trigger, the Fat Daddy. It was the only one they offered at the time. I now have the Racer installed. However, the trigger is only going to eliminate the pre-travel, which is probably a 1/4" to maybe 5/16" at the most. It's easy enough to test, just press the trigger to the "wall", just before it breaks. That's about how much you'll eliminate. The left most mark is obviously where the trigger sits at rest. The next is at the wall where the trigger will break. 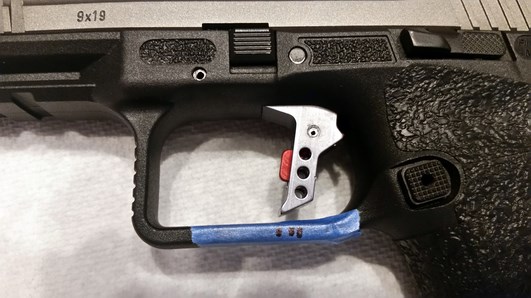 Here's a picture from a post where a fellow member with smaller hands was having an issue with soreness on his strong hand thumb joint. If you look at the "blue" parallel lines, he has the gun twisted in his hand to reach the trigger. This was causing the left corner of the frame below the slide to irritate the thumb knuckle. I can see where you have some of that in your "modified" grip as well. Ideally, you want the strong hand as high as possible on the gun in the web of the hand to minimize the recoil. You can see the "wrinkle" in the web of my hand in the lower left corner. In your case, you wouldn't be able to reach the trigger. I don't think the Freedomsmith would work either with the, "quote-unquote", proper grip. With that said, you're just going to have to use a modified grip no matter what as you've shown. I do recommend the Freedomsmith as others have, but it won't be a "cure all"! 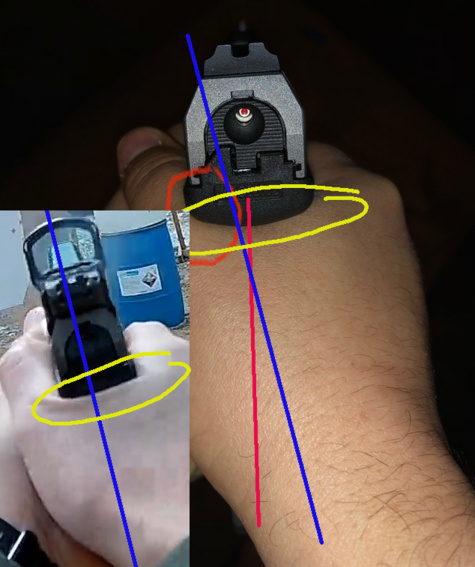 I would try removing the backstrap and grip the gun to see how much of a difference it makes. Taylor Freelance makes a brass backstrap that replaces the plastic factory one, I have one on mine. It's solid, so you can take a Dremel and remove some of the material to make the overall grip smaller. You could take a tiny bit of plastic off the front, as I've undercut the trigger guard and frame on my SFx. Other than laying your hand down on the table and taking a hammer to it, your options are somewhat limited.
1 x
Top

I would second trying it without a backstrap, as you might find that, no matter the degree of swell there is in the lower area, the distance between the web of your hand to the end of your index finger may be your shortcoming.

If you do find that you can get a comfortable grip without a backstrap, let me know. I’ll fill my the smaller backstrap from my SFx with some Amazing resin and send it to you to hack away at. The resin machines like wood, so it shouldn’t be too difficult to shape.
0 x
Top
Post Reply
10 posts • Page 1 of 1