Discussion Section for All Off Topics Subjects.
Post Reply
20 posts • Page 1 of 1

I regret never putting together a GHB years ago. And now with this current situation, I'm motivated to start building one. I've got the basics, extra socks/clothes for the current weather, energy bars, knife, flash light, fire starer and stuff like that, but not sure what else to put in there. Does anyone have a GHB? What might be some good items to add, that a person wouldn't normally think of?

I'm contemplating adding a gun, but that gets tricky if you're crossing state lines. And, the risk of your car getting broke into when you stop at Walmart or something. I think for now I'll just stick with my daily EDC for that. I suppose situation will dictate though. Maybe for now, just some extra ammo.
0 x
Top

In winter months I keep spares clothes in the truck. I always have a fully loaded med kit in the truck for any occasion.

Firearm, always with spare mags in the door.

Water is the biggest thing that I need to rethink and keep in the truck.
1 x
LT

That's what I'm researching now. I'm looking at a water filtration kit made by Sawyer, which isn't too expensive. There's also pouches of water available that's suppose to last for awhile with the temperature swings.
0 x
Top

I have an SUV that doesn't have a trunk, so I picked up a Plano Storage box at Academy to keep everything organized. I have a lock on it and cable to keep it secure.

Hmm, that's a good idea too. Wouldn't be too hard to bolt something like that down in the back of my Jeep.
0 x
Top

I've debated on keeping a pistol in there, perhaps ill eventually pick up a cheap LEO trade in G22 for that purpose. If I'm in my truck though I'm atleast packing a .380 whenever I go out. Also still want to pick up one of the vaults that replace oem under rear seat storage container that would fit a basic AR or PCC.
1 x
Top

Is that the type where you have to have a HAM radio license? I've always been interested in that, but never did anything to get licensed.
0 x
Top

Is that the type where you have to have a HAM radio license? I've always been interested in that, but never did anything to get licensed.

Yeah I been meaning to get around to sending in the forms to get mine.
1 x
Top

Same problem, but a smaller solution. I have a white Calebas storage box for $14 or so, about the size of a .50cal ammo can. In the car at all times is: .380, two extra mags, 2-3 knives, six oversize mylar blankets, five orange flashing electronic flares, batteries, various generic drugs, small med kit, bug sprays, disinfectant sprays, probably more rattling around in there somewhere. Also a lock and gun rag for crossing lines into unfriendly states where I need to lock the gun in the back somewhere (or even disassemble the darn thing - MD). There have been times that I had an AR15 stowed in semi-hidden under trunk area of the Tahoe as well.
1 x
Top

I've got gear stashed in the truck to establish camp for up to 8 people. I've got a work duffel that covers going from the office to responding to incidents in the field, and a bit of sustainment there.

My EDC bag has my laptop, a Steno notebook, boo boo kit and IFAK, with an extra TQ strapped on the outside, rain gear and a poncho, mechanic gloves, multitool, chem lights in red, green and white, about 75' of cordage, energy bar, at least 1Bic lighter and a laminated street alas for my area. I haven't decided to replace the plastic back panel with a ballistic panel, but I keep thinking about it. I keep the hydration bladder that fits my bag in the work bag, though I've always got a 32oz Nalgege bottle with me.
1 x
Top

Good info. Surprised I didn't think of most of these things.
0 x
Top

First off to plan a propper get home bag you have to define the situation(s) you expect to have to use it in. After that there are basics that should be included in every bag such as fire making, water treatment, improvised shelter, food, IFAK, knife, CC and ammo, map, compass, protective layers (rain gear, jacket etc) water container and flashlight. The planned situation dictates what needs to be added beyond these basics.
0 x
Top I build this bag for earthquke , but may use for any emergency situtations. It is stay in our bed corner. Ready to go 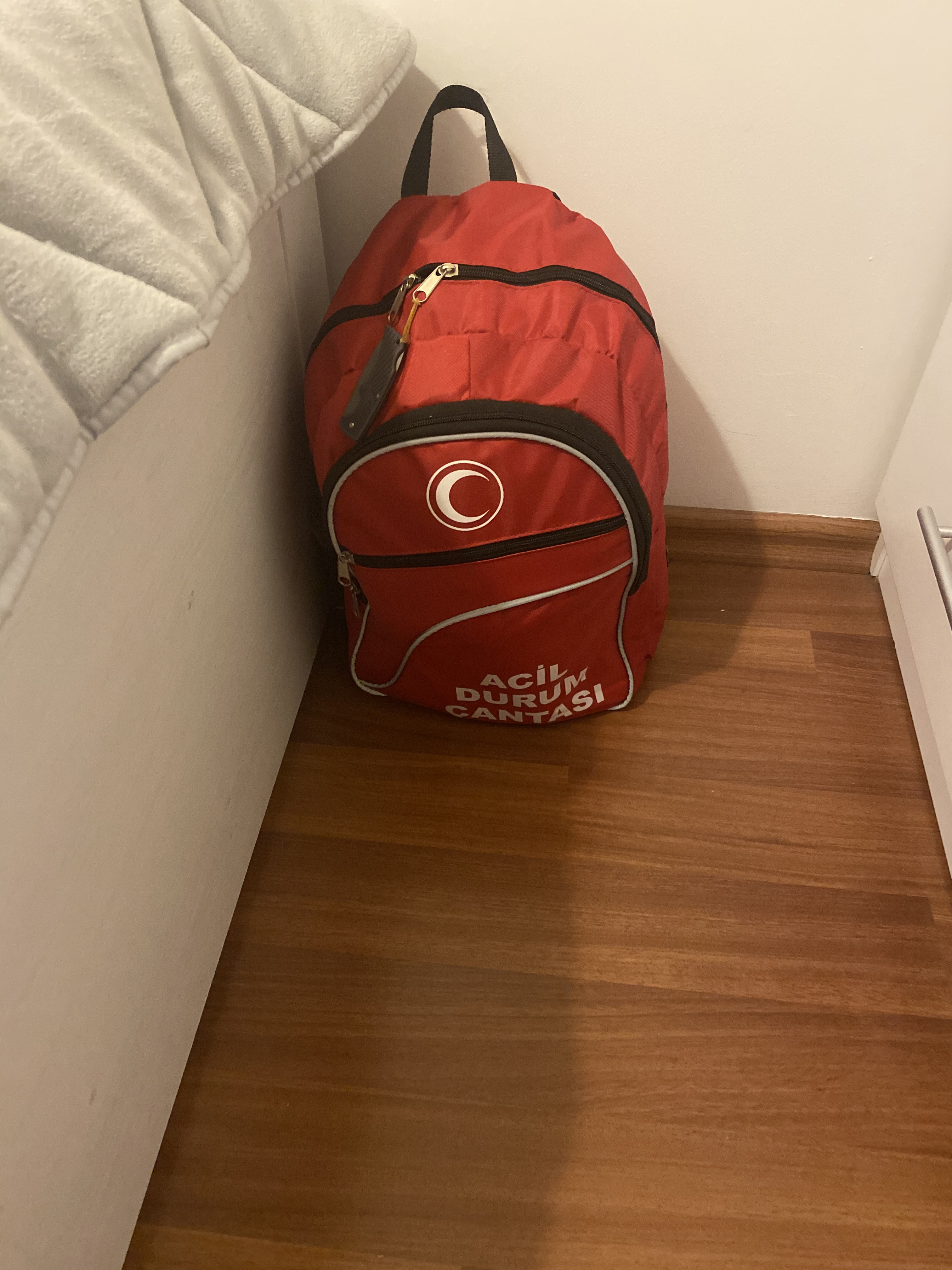 @Janik how far is your get home bag rated for?

When I was still working it was 37 miles home from work. That was my "get to" distance. My concept was, what was needed to fight my way home. Once there all my other needs were met. A PCC or AR was really what I needed to add to what was in the truck every day.

And never let the tank get below half full. LT endorsed.
0 x
LT

It's only about 10 miles to/from work. But It would also be for travel.
0 x
Top

It is not perfect but I think it would get me home if I am within 100 miles of home.
2 x
Aut Pax Aut Bellum
45 ACP, Because short fat and slow will get the job done.
Top

I like everyones contents , I keep a decent supply of things in my truck ( clothes , spare ammo , boots , and tools. I like to have a small ( but not too small) pry bar in the truck as well , never know when you may need to force something open.
0 x
Top

What about tourniquets? I have read that ex-special forces folks see these as top of the list in bug out bags.
0 x
Top

I've got 1 in each IFAK, 1 strapped to the strap of my EDC bags and a couple in the large 1st aid kit. In a civilian context, they aren't the same end-all-be-all as they are for the military.

While both face relatively the same risk of extremity trauma from accidental injury, the military routinely wears armor, which mitigates some of the threat to the torso, making a tourniquet more likely to be needed. In civilian hostile encounters, most serious injuries are upper thoracic or cranial. Again, those bits tend to be armored in a military context.

Have one. Have it readily available. Know when and how to use it, especially on yourself. It's just one part of the whole picture.
0 x
Top