Anyone have a BodyGuard or use Hydra-Shok?

Anyone have a BodyGuard or use Hydra-Shok?#34384

I’m hoping the ammo is worth it’s price ($40 for 50) and it makes a good ankle biter gun. I figured I’d get some feedback if people that may have one or people using Hydra-Shok. There is a YouTube series of videos on finding good carry rounds for pocket .380s. The guys testing ended up being some of the more consistent formatted testing I’ve seen a YouTuber do. He did another series for 9mm ammo for short barrels as well. It is a YouTube rabbit hole worth going down. The unfortunate thing is that the HydraShoks were one of his earlier tested rounds, before his format really changed to be its most consistent, where he included bare gel and denim testing in the same video. Also he switched from Clear Ballistics gel to the FBI standardized natural gelatin. You will note in the Bare Clear Ballistics gel Test, that the bullets actually bounce back in the wound channels, and he shorts the overalL penetration Depth. The 9mm series was done after he got his format and test medium down.

Here are a couple links.

The final wrap up of the tests and the rounds that met his criteria.
https://youtu.be/GNtPHYwcDts 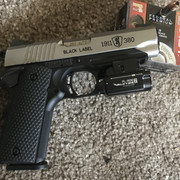 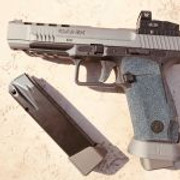 Note- all of my tests were loaded by me and were loaded hot. They were not watered down factory loads but would probably be in the +p+ category.
"When you come to the fork in the road, take it." -Yogi Berra

I’m going to try them all. I need some target ammo so we will see what runs. I think the same whenever I have my 2 carry guns next to one another, I either carry G42 or P10S and the 42 makes the p10 look pretty huge.

keltex78 wrote: ↑Tue Jun 09, 2020 5:07 pm For the short barrel .380s (LCP and the like) I've found that I prefer the Hornady XTP (TAP) or FTX (Critical Defense) bullets. They appear to be a good compromise between penetration and expansion, even at the lower velocities you get from the short barrels.

From ssgndoc links It turns out the Hydra-shok against all those outperformed them. I still use critical defense in my Canik, but as we know all ammo is different and caliber changes things. In 380 nothing beat the hydra-shok.

He tested everything and here’s a few runners up. He said critical defense was the WORST in 380.

keltex78 wrote: ↑Tue Jun 09, 2020 5:07 pm For the short barrel .380s (LCP and the like) I've found that I prefer the Hornady XTP (TAP) or FTX (Critical Defense) bullets. They appear to be a good compromise between penetration and expansion, even at the lower velocities you get from the short barrels.

It turns out the Hydra-shok against all those outperformed them. I still use critical defense in my Canik, but as we know all ammo is different and caliber changes things. In 380 nothing beat the hydra-shok.

He tested everything and here’s a few runners up. He said critical defense was the WORST in 380.

The Hornady XTP bullet in a few rounds were the top performers, but the Hydra-Shok was among the final rounds. Funny that two of the oldest bullet technology rounds did best.

By One1 -  Wed Jun 10, 2020 10:23 am
-  Wed Jun 10, 2020 10:23 am #34451
I’d say they did it right the first time. As much as bullet technology has came along for 9mm, the 380 design was right from the start. I do believe that 9mm has made huge strides in the last 5 years. Paul Harrell has said for years that people who buy the same bullet for all calibers will be sorely disappointed. The tests we are seeing years later are proving that. I still prefer Critical Defense for 9mm.
Elite SC (Lt Dan)
SFx (The Giraffe)

1. Were you using iron sights at all or just the laser?
2. What was the distance?
3. Did you try making any adjustments?
4. Did the laser come close to being lined up with the sights on the target?

There are reasons I usually caution people on using lasers. Folks who are used to using iron sights will often try to “use both”.

Had a customer at an indoor range where I would work part time. He had bought a Glock 19 From us and Am month later bought a laser. He wanted us to install it and sight it in. I sighted it. We called him and told him the pistol was ready for pick up. He showed up and took it out on the range. Put his target at 25 feet, and printed a paper plate sized group a foot low.

He came in and said there had to be something wrong with the laser, because his groups were horrible and low. I grabbed some ammo and went out with him. I shot a tight cluster in the x ring, and handed him the pistol and I watched him shoot. I noticed him pulling the pistol down. I grabbed some making tape and said I was going to fix his problem. I taped over his rear sight.

He asked what that was going to do, and I told him it was going to keep him from lining up,his sights and then looking for the laser dot under/behind his sights. He went out and could only focus on the laser. He placed a tight group in the 10 ring. He just kind of smiled and said, “guess it takes some gettin used to”.

I would recommend resting the pistol On a bench and getting your sights adjusted. Turn the laser off when you use the irons. Get the laser sighted and make the conscious effort not to use your iron sights.

Also that “snappy” quality of these small light weight .380s doesn’t help with recoil anticipation and downward flinch either.

I said, up above that I went with the Ruger LCP. I did it say it but I tried a Body guard and didn’t like it. I shot the little LCP just a bit better. But one of my friends got his Bodyguard right after I got my LCP and he loves his.

We have created lots of YouTube videos just so you can achieve [...]

The best flat phpBB theme around. Period. Fine craftmanship and [...]

All you need is right here. Content tag, SEO, listing, Pizza and spaghetti [...]

this should be fantastic. but what about links,images, bbcodes etc etc? [...]