General Discussion Section for All Other Makes and Models of Handguns and Rifles, including Aftermarket Accessories. Please keep Canik Firearm discussions in the Canik section.
Post Reply
13 posts • Page 1 of 1

Nighthawk is well known and a leader in 1911's.

Yeah, saw that. Cool but crazy expensive. My Kimber trigger is pretty good and I would be hard pressed to justify this. (And this from a guy with 4-5 Geissele triggers, but all bought on sale.)
0 x
Top

Hmmm. Interesting. I’d have to chuckle at some 1911 purists for putting stamped parts into one of “John Moses Browning, Gods own gunmaker’s,” “perfect” 1911s.
1 x
Top

I have a Springfield Range Officer Champion in 9mm. The trigger is almost half the price off the firearm. But, doesn't mean I'm not thinking about it.

I am somewhat of a purist on 1911's. Yet some might want to give it a try for simplicity sake. Most 1911 platforms, have in the range of 4# triggers now. Even the lower end manufacturers. I have 2 factory SA TRP's and both are less the 4#s. Some of my newer Colt's are right at 5#s. The older Colt's I have are all 4#s or less (mostly less). Probably the cost of the Nighthawk trigger will detour some. I just purchased a new Wylie Clapp CCO and it is just under 4#s. A interesting concept and design non the less. 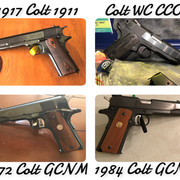 Seriously, I'd like to hear a trusted review before seriously considering it.
0 x
Top

Seriously, I'd like to hear a trusted review before seriously considering it.

Soon as you send me that trigger I’ll review it. I’ll even try it in several different pistols.

[/quote]
Soon as you send me that trigger I’ll review it. I’ll even try it in several different pistols.

Yeah, I’ll take one for the team.

I watched a youtube video of the install on a RIA 1911. Stock it was about the same as the new install. 4 .lbs and some change. I can not remember the link, do a search and it is out there.
0 x
Top

Interesting.
They have some good videos for novices.
0 x
Top

I've done a lot of 1911 trigger jobs. Labor and parts (if needed) would run around half of what they're asking. I'd say it's a good mousetrap, but maybe not a better one. Just my thoughts.
1 x
Top
Post Reply
13 posts • Page 1 of 1