Competition Shotgun- Which is best?

Competition Shotgun- Which is best?#23341

By varmint -  Sat Oct 26, 2019 12:08 pm
Like
-  Sat Oct 26, 2019 12:08 pm #23372
I also went through this years back, I bought the FNSLP over all others with zero regrets the Mossbergs I have seen shot are very ammo sensitive to the steel headed ammo the FN shoots anything every time, the last several shoots I have had some ask to shoot mine and 3 bought one! In 8 yrs or so not 1 malfunction at all with any ammo cant count the stoppages I have seen with the Mossbergs or Siaga's some had, I went to a larger shoot out of state awhile back and I was about the only one with zero stoppages the RO said they saw, A 200 round shoot with buckshot, birdshot and slugs. Love the flip up sights for slugs. The other shotgun with zero problems was a Benelli M4 which was my 2nd choice but totally pleased with the FN. I even shot some ammo other were discarding as they could not get it to work in the Mossberg JM models all steel headed promo rounds. I did look at a Remington and it felt good but so glad I went with the FN.

Mine is the NON pistol grip model with the slightly longer barrel and low front sight.
Last edited by varmint on Sat Oct 26, 2019 10:12 pm, edited 1 time in total.

varmint wrote: ↑Sat Oct 26, 2019 12:08 pm I also went through this years back, I bought the FNSLP over all others with zero regrets

Thank you for sharing your experience. I'll have to give FN a closer look.
How do I delete my profile?

By varmint -  Sat Oct 26, 2019 3:07 pm
Like
-  Sat Oct 26, 2019 3:07 pm #23377
My FN as said shoots anything I have put in it, uses Browning Invector chokes and just works! It does seem to shoot Federals some better pattern wise they are what I buy in the 100 ct boxes at Walmart, one word of advise if you shoot slugs try them out as most have a very varied point of impact, again Federal the best FOR ME, usually elevation.

2 things 3 gun taught me were POI on slugs and buckshot and knowing where they hit, I shot a stage 1 time where all you had were head shots with slugs, I could not believe how many missed them totally.
Right after I got my FN I went to a training/shoot in the Nashville area and was the only shooter who never had a stoppage. We shot 500 rounds. If you do night or low light shoots and get an FN look real hard at the optional forearm with rails on it.

Not going negative on anything but I have never seen 1 Mossberg that shot the promo loads without a problem several club members got them when we started the 3 gun, stick with all brass shell heads and 3-1/2 dram & up loads they did ok, the Siagas or how you spell them were the worst needing 3-3/4 dram loads all brass heads to work just a problem ever stage I remember, Remingtons were ok just my shooting times with the FN were always faster, love the sighting channel on the receiver top with sight folded down.

There are some aftermarket items for the FN but you honestly do not need any, keep it lubed/clean and just shoot it knowing it will work shot after shot.

By Sandpaper -  Mon Oct 28, 2019 4:56 pm
Like
-  Mon Oct 28, 2019 4:56 pm #23434
Great information. I have been stocking up on fosters and other bird/buck loads to experiment with once I decide on a shotgun. The FN SLP Competition has a lot of the features I'm looking for. The more I learn about chokes it seem's like it would be a fun hobby to experiment with dialing in some patterns at different ranges or tightening up slugs. As you said, many of the desireable competition features are being included by manufacturers and even being implemented on field guns.
How do I delete my profile? 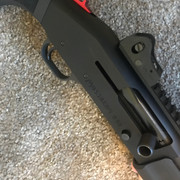 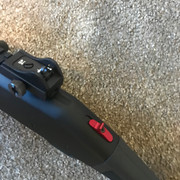 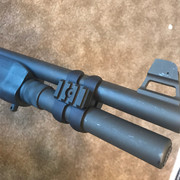 
That's a nice looking shotgun. I'm glad you are happy with it. I hear a lot of the same from many others. Great value, reliable, proven, accessories. There are many benefits. Thank you.
How do I delete my profile?

I have been looking into the M3K Freedom Series. Very nice looking shotgun. The price is fantastic considering the included upgrades. I have to say that of all semis I have handled the action on the Stoeger is the most impressive. It is very smooth. I notice many tend to open up the loading port as well. Out of curiosity, is there an issue with the factory extractor/spring?
How do I delete my profile?

This is the style that I am interested in as well.
How do I delete my profile?

This sounds like a nice practical advantage. Just looking at it aestheticly I like that the competition version comes in blue. Something different. I like that about the V3 as well, it's receiver is Remington green.
How do I delete my profile?

Sandpaper wrote: ↑Tue Nov 12, 2019 5:56 pm aestheticly I like that the competition version comes in blue

I thought it looked pretty good that way
LT

I agree. Nothing wrong with black and brown guns but I've been seeing them all my life. It's just a matter of time before I show up to the range with a lavender and eggshell kryptek patterned rifle.
How do I delete my profile?

I've heard prices went up again with new year at A[…]

FWIW, I no longer believe a word that the FBI says[…]

When I contacted Canik a couple of months ago inqu[…]