SHOT MY FIRST EVER MATCH TODAY

SHOT MY FIRST EVER MATCH TODAY

Today a first; my first competition shoot of any kind.

A friend of mine who shoots USPSA has been inviting me for while but there was always something else going on. So I cleared my schedule and went. Understand, most of my shooting has been static either at a target or at steel but never drawing from a holster (no local range allows it). Many (many) 1000's of rounds down range but this is a different type of hunting dog.

First shoot was an outlaw steel match. "Oh, that shouldn't be too hard" he said in his head. Ah, yeah. It was a head-to-head bracket match with a blind draw (all levels of shooters together). Two shooters shooting at the same time plates, poppers and static steel and the first one to ring or drop all their steel and drop the overlapping popper before the other while completing the whole course, wins. And, best two out of three with a loser's bracket. Think of me when you read "loser's bracket".

What a way to loose my cherry! But, I will say up front, it was freakin' awesome! Nerves were not as bad as I thought and as stated here many times, the shooters around me were happy to give me pointers and help. I cobbled together a belt, two different mismatched dual-mag holders, some keepers, and a new Blade-Tech holster with the short drop. I, not knowing exactly what the shoot was, brought a full-size M&P 9mm 1.0 with Apex trigger. I was shooting against guys with magnetic holsters, high-end race guns and cool shirts, but I was not swayed; I sucked anyway. I lost both head-to-head matches but I didn't care. Next outlaw steel match, I just might bring the SFx with Viper optic.

If you EVER thought about shooting competition, do it. It is a hoot & a holler. I will be going back next Sunday for another outlaw steel match and the third Sunday of the month my first qualifier for USPSA in production class. Do not talk yourself out of it; if you like to shoot, you will like shooting this even more. I had practiced drawing and firing at the house with a laser round and an app on my phone which did help.

Did I mention that I won $50? Due to the bracketing and losing the 1st round, I had a bye in the 2nd round, money! I used the money to join the local club. I also had joined USPSA last week.

And dress for success, I wore a Canik Fanatik tee-shirt. I guy asked me about the shirt and told me he is a moderator on the Canik Fanatik FB page and even mentioned our imperious leader, Janik. It's a small world. What a day!

Note: no pictures or videos today but my friend did get a hidden video of my first runs. If I don't look to spastic I may just post it later.
7 x
LT

Nice. Atleast you had fun and made a little money
0 x
Top

Congrats! I'll be shooting my first match next weekend on the 9th. I'm looking forward to it, as I'm sure it'll be a lot of fun. Keep us posted on your endeavors and how things go.
0 x
Top

Congrats. Glad you had fun. Welcome to the addiction.
1 x
Pew pew
Top

Congratulations LT. I still haven’t shot my first match yet. Pun intended, I’m gun shy but know I need to force myself out there.
0 x
Top

LT USN (Ret.) wrote: ↑
Sun Feb 03, 2019 4:46 pm
What a way to loose my cherry! But, I will say up front, it was freakin' awesome! Nerves were not as bad as I thought and as stated here many times, the shooters around me were happy to give me pointers and help.

One thing you'll find at most matches, a bunch of nice guys willing to help you out! I just started last spring and it is addictive. Shot a match this past Saturday and it was COLD!...9* at the start of the stage with snow on the ground. It was my first time shooting at this club which is about an hour north of me, and of course after helping setup up a couple stages, freezing my butt off...who's name gets called out first to start on the hardest stage...

Stage 4 was one shot on each target, tactical priority, limited 12 shot count and steel must be hit last. So buzzer goes off, hit my first three head shots, then on the middle of the three to the left, I went low on the center and barely clipped the non-threat, but it's a HIT

. Instinctively I see the miss and fire a second shot, then realized, "$HIT"...it was 1 shot per, froze for a second as I realized what I did, then finished without engaging the steel, no rounds left to shoot. So that one shot cost me a hit on a non-threat, down 5, down 3 for a procedural, and down 5 for a missed target.

...I'm thinking this is going to be a good day! After that I settled down and shot well. Also it was my first time shooting a low light indoor stage too and finished 6th out of 28 shooters. 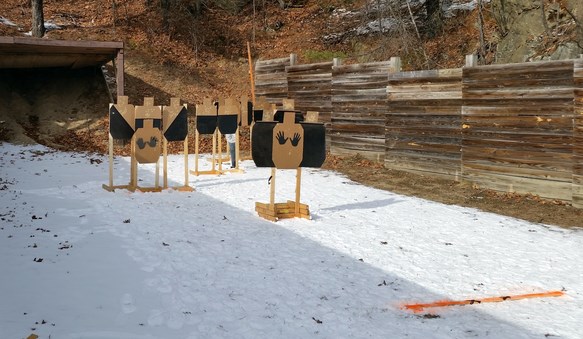 The more you shoot the easier it gets, and you'll definitely feel more comfortable running the stages. It's usually that "Mental Fart" that mess you up more so than your shooting. It's the little "odd ball" twists they sometimes throw in that get you in trouble. One stage we had to start with 6 rounds in the first mag. So on the command..."shooter make ready", like I always do, I draw my gun on target to make sure my dot is on, take the 6 round mag insert it into the gun, rack a round, double check a round is in the chamber and holster..."WRONG"! Was supposed to insert the mag and not rack the first round! BRAIN FART...and a procedural!

It's funny because it seems these quirky things/twists are more of an IDPA thing. Up until this match, I've always loaded to division capacity, and you have to keep track of your shots on limited count stages. My son only shoots USPSA and they don't play those mind games. I guess it helps keep our OLD MINDS thinking!

@GlennSFX Thx for the encouragement; I'm starting slow with local steel matches and USPSA. There's an outlaw steel match I've signed up for next Sunday.

Not sure anything will, "keep our OLD MINDS thinking!" but, we might as well try.

Not sure anything will, "keep our OLD MINDS thinking!" but, we might as well try.

COOL!
Steel is a lot of fun! You'll have to try the "Steel Challenge" matches. All steel and different stages. All shot from a single position. I have a few steel targets and recently made myself a plate rack that I can use at my outdoor range. 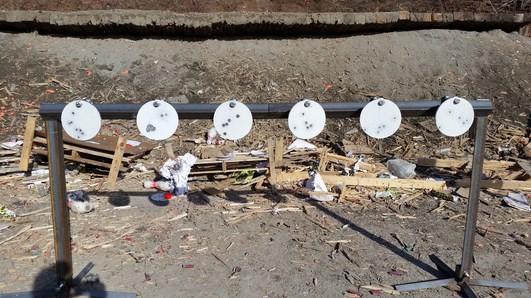 OK, as promised here's are the videos of my first two runs at my first competition. I'm the one with the orange towel. First time I've ever pulled for a holster and shot.

No animals were hurt in the making of these videos.

Getting your first match under your belt is key. They all get a little easier. It seems the little adrenaline rush when the buzzer goes off, somehow creates a disconnect between the brain, eyes and hands!!!

I found having your own shot timer and training with it really helps. Set slower par times to meet and then work your way down as your accuracy is maintained. Better to start a little slower and be accurate than trying to go fast.
1 x
Top

No animals were hurt in the making of these videos.

...but apparently quite a few dirt clods were...