Ammo, do you buy now? Or wait and hope for prices to drop?

By ShooterMcGavin -  Sat Jan 30, 2021 8:46 am
Like 1
-  Sat Jan 30, 2021 8:46 am #40933
I think brass prep is a great idea. I just started tooling for small batch rifle reloading right before Covid struck. I bought a single stage so I could learn the process slow and steady. I figured I could eventually tool up for volume(380acp/9mm/5.56), but my timing was unfortunate. I have lots of brass for all kinds of calibers, but only powder, primers, and bullets for 35 Remington.

Firearms as a hobby is tough right now. I look for tools and parts mostly. Really helps to have been into this stuff long enough to know how inflated prices are. I couldn't imagine going into all of this without a frame of reference. 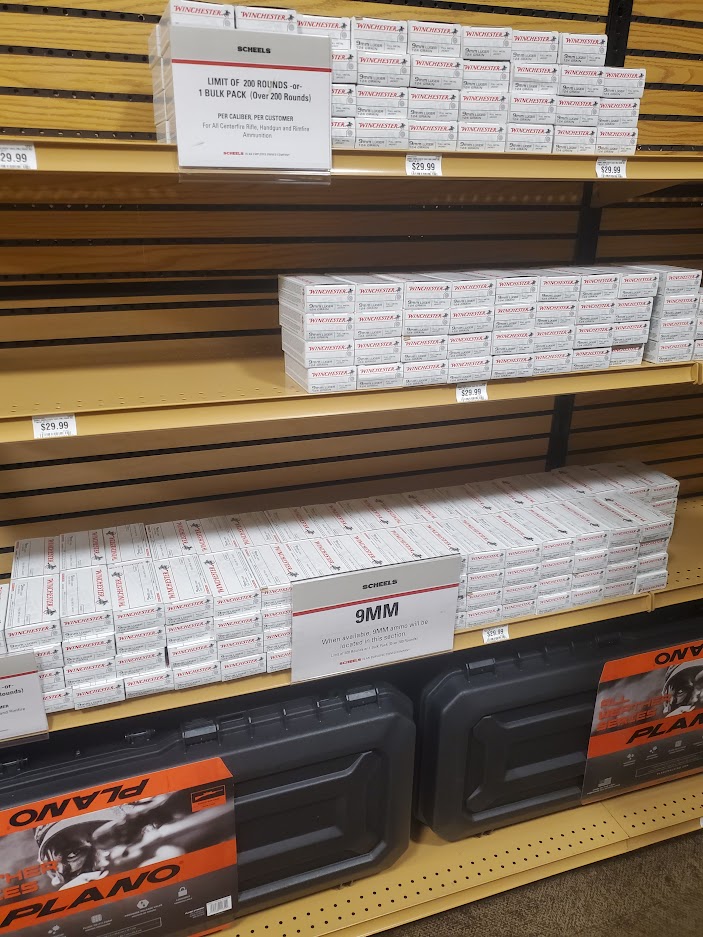 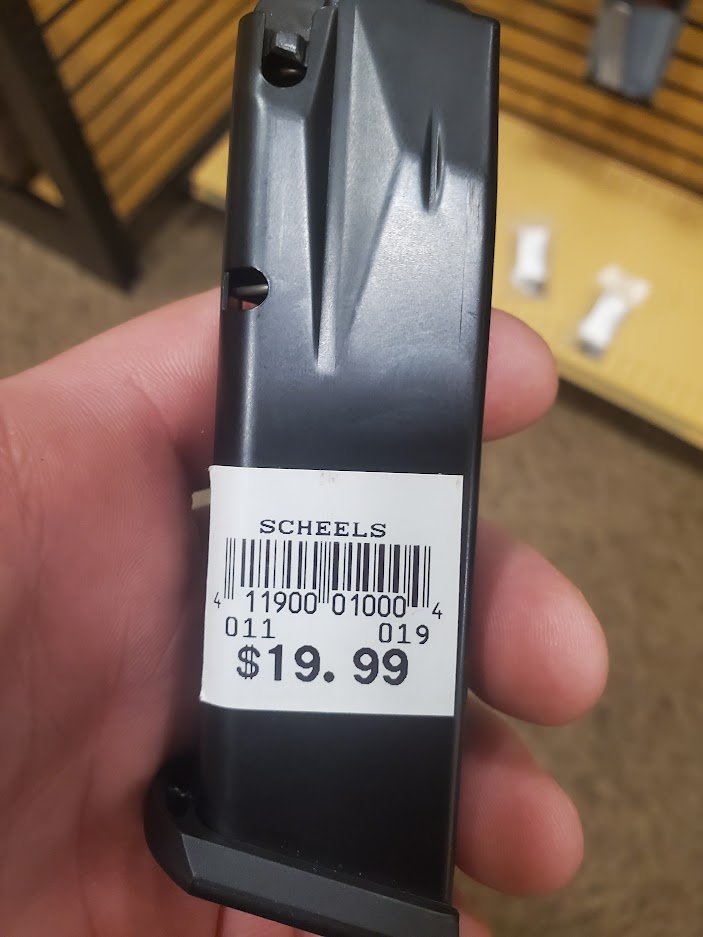 No, I will not purchase at these inflated prices. But that is a qualified answer.

What happens if I run out of components and the only ammo available is north of $0.75 per round? I'm guessing I would be forced to buy. Or, I could carry an AR or 9mm carbine with me in public.

By ncjw -  Thu Feb 04, 2021 3:06 pm
Like 2
-  Thu Feb 04, 2021 3:06 pm #41124
Just dropped all notifications from Target Sports USA. I had signed up for text and email for the last two months. They average about one delivery every couple of days but when you click the notification they are typically already sold out. Occasionally they get a pallet of something that is still in stock when you click.

ncjw wrote: ↑Thu Feb 04, 2021 3:06 pm Just dropped all notifications from Target Sports USA. I had signed up for text and email for the last two months. They average about one delivery every couple of days but when you click the notification they are typically already sold out. Occasionally they get a pallet of something that is still in stock when you click.

Yeah, I'm not too happy with them either. My membership just renewed back in December I think and I'm regretting it already. It's ridiculous that places can have decent prices still and they are out of stock all the time and expensive. Thought about complaining for a refund or suspension on my membership until they get things in order.

They need to be outlawed!!
The Texas Attorney General put them on blast and threatened them...yet they're steadily taxing and charging folks like it's ok....
https://www.statesman.com/story/news/20 ... 932523001/
BTW...I can never find 9mm ammo in stock at Target....NEVER!

By colonel00 -  Fri Feb 05, 2021 2:49 am
Like
-  Fri Feb 05, 2021 2:49 am #41141
I can find it, look up 3 posts. The biggest problem, as much as I hate to say it, is capitalism. People are willing to pay the prices that sellers are charging now. We cannot hate the concept of capitalism now and we must wait until the demand drives the prices down again. As weird as it sounds and as annoyed as we are, this is honestly the best part of our country at work. Yeah, it sucks that supply is low and demand is high and prices have risen. However, eventually it will level out

colonel00 wrote: ↑Fri Feb 05, 2021 2:49 am I can find it, look up 3 posts. The biggest problem, as much as I hate to say it, is capitalism. People are willing to pay the prices that sellers are charging now. We cannot hate the concept of capitalism now and we must wait until the lack of demand drives the prices down again. As weird as it sounds and as annoyed as we are, this is honestly the best part of our country at work. Yeah, it sucks that supply is low and demand is high and prices have risen. However, eventually it will level out

It still sucks, though.

If you think this is bad, wait until Biden makes mail order ammo illegal, JHP requiring NFA tax and registration, psych evals to shoot, and every other Communist ideal of controlling subjects.

Janik wrote: ↑Wed Jan 13, 2021 3:59 pm The other day I did order some bullets for reloading, and thankfully not too expensive. Primers are the big issue. I've got plenty of self defense ammo, so I'm reloading for the range. But I've seriously cut back on my range sessions. Shooting a lot more 22lr these days.

I am only shooting 9mm these days, because my stock pile of 9mm components for reloading ate still pretty good and I have been able to keep my supply up. What caught me off guard was how hard it would be to keep shooting 22LR.

They say this shortage is due more to the large number of new gun owners and people stocking up, and that ammo manufacturers are producing record amounts but that still isn't enough to keep ammo on the shelves. 22LR is the most common caliber, so finding 22LR has been very hard, and paying .25 to .30 a round for 22LR is even harder for me. I bought a bucket of 1200 rounds of Remington golden bullets last spring for $60 so I could extend my range trips by shooting some 22LR every now and then. Now I have only about 400 rounds of 22LR and when I can find some, it cost more than it cost me to make 9mm.

They are charging $34/box of IMI 9mm. They claimed that they are paying $33/box and only selling it at a dollar profit to keep the range fees coming in, so IMI and the distributor are making all of the "windfall" profits. They said that the traffic is down considerably since the post Christmas rush and that ammo prices are the only reason that they are hearing for the slowdown.

anyone near you reload ammo in bulk, at say a sporting goods store, fish and tackle store (this is where i get mine)
GOA, & NRA, & GSSF & USCCA member.
Canik METE SFX I had a AR-15 and sold it last year, and while going through my stuff, and finally organizing some of it, I found five boxes of 200 round Federal .223 FMJ, all new and sealed in the box. I took it to the show, saw the insane prices, and held up a sign, I sold it for .50 a round=$100 a box. And I limited it to one box a person, 15 minutes later I was sold out to say the least. I even had people offering me MORE money if I sold them all 1,000 rounds, tempting as it was, I held my ground. I made a little money, but I can sleep at night.

colonel00 wrote: ↑Mon Feb 01, 2021 10:43 pm Stopped by Sheel's again. They had a bunch of Winchester 124gr (not NATO) for $30/box. Not even touching that. Plenty of others were loading up on their limit of 200 rounds though. It has to get to a point where people stop paying these silly prices before the prices come back down. On the bright side they had a Canik Elite 15 round mag just sitting by the magazines for $20 so I did grab that

Also, I'll add that the folks at Scheel's seem to be the most pleasant. Don't hesitate to ask them if they have anything in the back (without being rude). At least at this store, they had quite a bit that they'd go back and get for people like the 5.7 I grabbed as it wasn't on the shelves. I will continue to hoard what I have.

The prices are still just as high, but I'm starting to see SOME availability. Maybe things are loosening up a bit?

I have two Dillon 550's, and 2 Lee Load-Masters. When properly set up and maintained, the Load-Master will spit out a bunch of well loaded rounds in a short time. However, they can be touchy to get set up. Mine is set up for one caliber and I don't mess with it.. and it works great. It's a full progressive with 5 stations and automatic indexing, which you probably already know. The Dillon is what I call "semi-progressive" as it has to be indexed manually, and it only has four stations, but that is not a disadvantage. I have one set up for Large Primers and the other set up for Small Primers, so when switching calibers I don't have to mess around with that.

Right now EVERYTHING reloading is 2x or 3x more than it should be.. nothing is going to help that for the foreseeable future. My suggestion? Buy used when you can find it (brass especially), stock up on bullets, which are not too hard to get right now. Powder and primers are going to be tough to fine but keep checking locally in gunshops and any networking you can do. Reloading machines? Again, buy used if you can find them, especially locally or from friends/family if possible. It's a terrible time to get started, but it can be done. Be patient.... hopefully this too will pass....

- Weaponized Rival. I have been reading the revi[…]

So I've seen mention of how the grip is different […]

I'm not sure about the practice pistol but I have […]

&quot; If I shot Limited with a basically stoc[…]