It seems all of my bullet settings are shorter than most other reloaders. My rounds are accurate and cycle in all my 9mms. I was wondering what others OALs are when loading poly coated 9mm bullets?

As long as you are not compressing the power I don't think it makes a difference. Will they ramp into the barrels of all your 9mm's at that length?
LT 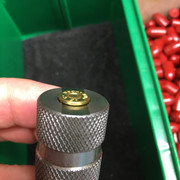 I fought with this same thing for months. Literally months. Then I finally stumbled onto what the problem was. (At least in my case...)

I had too much "flare" dialed into the flaring die. Even though it didn't look like it to the eye, it had too much of a widemouth.

It's kind of hard to explain... There's a lot of things happening nearly simultaneously; bullet pushed into brass, bullet doesn't want to go in, brass squashes juuuust a tiny bit, flare removal portion of die needs more dialed into it to overcome the few microns that it's too wide, which results in DEcreased neck tension, because the flare removal is overworking. And I'm talking such a minor amount you can't really tell the difference by looking at the flared brass.

As soon as I backed off the flare die to the point of 'just enough' to get the bullet to stay put during rotation of the plate, (I'd have testified it wouldn't be enough) my case gauging problem was instantly solved. Less flare requires less flare removal. Having a straighter wall of brass pushes the bullet in straighter, tighter, and with zero 'crimp' (crimp is a misnomer term) marks on a pulled coated bullet. My rounds have more of a bulged-under-the-bullet, straighter look now and less of an hourglass shape.

Once I removed some flare, my finished rounds at the neck went from .380-.381 diameter, to .381-.382 diameter -and dropped in perfect. Yes, they got bigger, but the die was no longer distorting the brass.

I didn't come up with this myself. I was frustrated just like you and started The Google for solutions. That lead me to "neck tension" discussions by people far smarter than me. "Crimp" is nothing. Neck tension is everything.

Try it, maybe it'll work for you.

I reset mine a couple of weeks ago after talking to Mr. Google (that's one smart dude). I get less rejects on the case gauge tester, maybe 2-3 per 100 rounds made. And I can correct 1 or 2 of those by "recrimping" them.

Mr. Google also said, "NEVER, EVER, try to change depth on a crimped round!" It's recommended to pull the bullet, resize brass and start the process over again.
LT

This caused me to have to seat bullets deeper than I wanted.

I sent the barrel to CylinderHone on Facebook, DougGuy over at Castboolits and he throated the barrel for me.

This solved the problem and allowed me to seat my .357 bullets out to a proper length. I've had Doug do half a dozen different barrels for me. He does damn good work.
American by the Grace of God, Marine by choice.

By TP9GINE -  Mon Dec 14, 2020 12:00 pm
Like 2
-  Mon Dec 14, 2020 12:00 pm #40169
I've been loading 125TC coated bullets and other coated bullets as well. I was having the same problem. With coated bullets they recommend more flare in the case so it doesn't damage the coating during seating. I back my crimp die out to the least amount of tapered crimp and seat the bullet to the depth I want. I then run them through my Lee Factory Crimp die, which I set using my case gauge so they easily drop in. No damage to the coating and they all cycle in my guns. It's another step but it's worth it to me.

By Weapon -  Thu Dec 24, 2020 6:42 am
Like 1
-  Thu Dec 24, 2020 6:42 am #40290
Some possibilities:
1. As mentioned above, you are not knocking the flare in the case mouth back down. You can reduce the flare and/or slightly turn down your crimp die to remove the flare. I only very slightly crimp with any coated bullet and by very slightly I mean “just enough to reduce the case mouth to basically the same diameter as that slightly below the case mouth (after the bullet is seated) or maybe .002” less at most.
2. Your case gauge could be cut to tight match dimensions meaning it is very likely tighter than most of the chambers in your barrels. If loading for one particular pistol, plunk test a round in that pistol’s chamber and see if it drops in and out easily and will spin freely in the chamber when fully seated. If loading for several pistols, plunk test a dummy round until you find the one that snags the bullet at the shortest COAL and then load slightly shorter than that

My SFx typically lets me load long. I have loaded several 124gr-150gr out to 1.165”-1.170” with no problems but there is always some variation from one barrel to the next. As such, always plunk test with a dummy round. If you are loading for only one pistol, start with a COAL on the high end (like 1.175”), plunk test it in your barrel, then reduce it by .002-.003”, plunk test it again, then rinse and repeat until it will pass a plunk test. Once you get an idea of how long a particular bullet can be loaded for your barrel, add a slight safety margin to account for minor variations in bullet ogive. Example: if you feel some very minor resistance between the barrel and the bullet when you try to spin it at 1.170”, reduce your COAL to 1.165” or 1.164”, crank out ten loads and then plunk test all of them. If any of them snag when you try to spin them, go slightly shorter. Some bullets are less consistent than others so checking more than two or three is a good idea.

I also have the 125g Green bullets. I am glad to hear the validation.

By Saspencer -  Tue Feb 16, 2021 8:59 pm
Like
-  Tue Feb 16, 2021 8:59 pm #41391
Not only do the 125 poly coated green bullets ( or Any other bullet ) have to "plunk" but turn freely in the your chamber; otherwise they would be pressed into the lands. Bench rest competiters back theirs off 2 to 5 thousands and usually skip the case gauge since chambers do vary.
Will it matter all that much in a pistol ? Probably not, but why not reduce the variables ?
Know I could use all the help I can get ! Lol